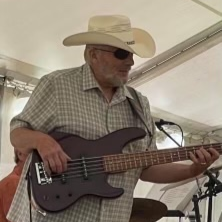 Raised on a ranch in Colorado Kenny has the most experience in Entertainment! Vocalist, bass, and acoustic guitarist Kenny formed his own band named “Kenny Bradberry and the Quar County Band” back in Colorado. While touring the band came to Jackson and decided this was the place to be. Kenny has toured all throughout the west and has been invited to perform in Denmark, Switzerland, and Southern Germany. A man of many talents Kenny previously owned and operated Jackson Signs along with his wife Cathy. Kenny designed, routed, and installed the cedar wood signs seen through Jackson. He now lends his expertise to help us create cedar and HDU signs in Teton Valley and in Jackson.